“I can finally see that your right there beside me. I am not my own, for I have been made new. Please don’t let me go. I desperately need you.” – meteor shower by owl city

When I went to California this year, we got to spend two days at the coast. It was insane. It still blows my mind at how much beauty we saw.

Me and emily kept trying to pry the starfish off the rocks. This is one of the ones we were able to get and this might be my favorite picture that I took. There were so many incredible creatures everywhere.

After we had gone to sea the elephant seals, we stopped on the side of the road and found this cool place. There were elephant seals lying around and you can just walk up to them and they don’t even look at you. I decided this cliff was very reminiscent of Pride and Prejudice so I climbed up the muddy slope ran through grass and stopped on the edge so emily could get this picture. It was a moment of epic freedom. 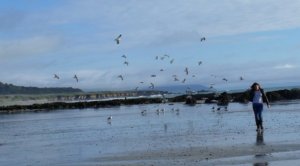 I love this picture. Me, emily, and julia saw all the birds standing in one place and we couldn’t pass up the opportunity. We ran at full speed at the birds and it was magnificent. They were flying all around us, the wind was whipping through are hair and the waves were crashing on the shore. It was a perfect moment. 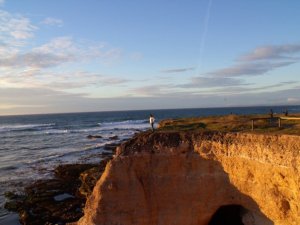 The best always comes last. It seemed like every place we stopped was a little better than before. We had to walk about a mile to get here, but it was completely worth it. I walked up to the edge of the cliff and looked down at the ground that was much further away then I expected. I’m really bad at estimations, but I want to say it was maybe 80 feet up? Maybe more I don’t know, but being the adventurous person I am, and being with my very adventurous older brothers, we decided we had to find a way down. We managed to find a small path that led to a lower cliff and then climbed down the ledges. After that we hopped from rock to rock until we finally landed on the beach. My left foot was now completely soaking wet because I sort of fell in the water, but it didn’t matter at all. It was the most perfect place. There were rocks filled with tide pools that had starfish and anemones. The sun was setting causing magnificent shadows on the rocks. However we’d seen all this before. What was truly magnificent, were the arches and caves created in the cliffs by years of erosion. You can see one of the caves in this picture. when we walked in, it was the most incredible thing because the way the sun was hitting the cave, the sand, rocks, and sea shells sparkled. It was brilliant. It was the epitome of majesty. I will never again underestimate the glory of God because being there gave me I tiny glimpse of the power, majesty, and glory of God.

“Healing depends on experiential knowledge: you can be fully in charge of your life only if you can acknowledge the reality of your body, in all its visceral dimensions.” From The Body Keeps the Score
and continually, continually let love in And let love stay
Sometimes my yoga practice is just a midday child’s pose 💚
I used to write hundreds of poems about nostalgia and longing. My inspiration was pipe dreams and unrequited love. Now I think I am learning to gather inspiration from the ground beneath my feet. I try to create magic from the routine of today. I write long to-do lists and I feed my dog and my days look mostly the same. And I am happy. My inspiration is the weather outside and my morning coffee and most of all my own heart, how far it’s come. ❤️
Got a hair clip. Needed everyone to know (including Wendy) ❤️
Date night with my wild boy ❤️